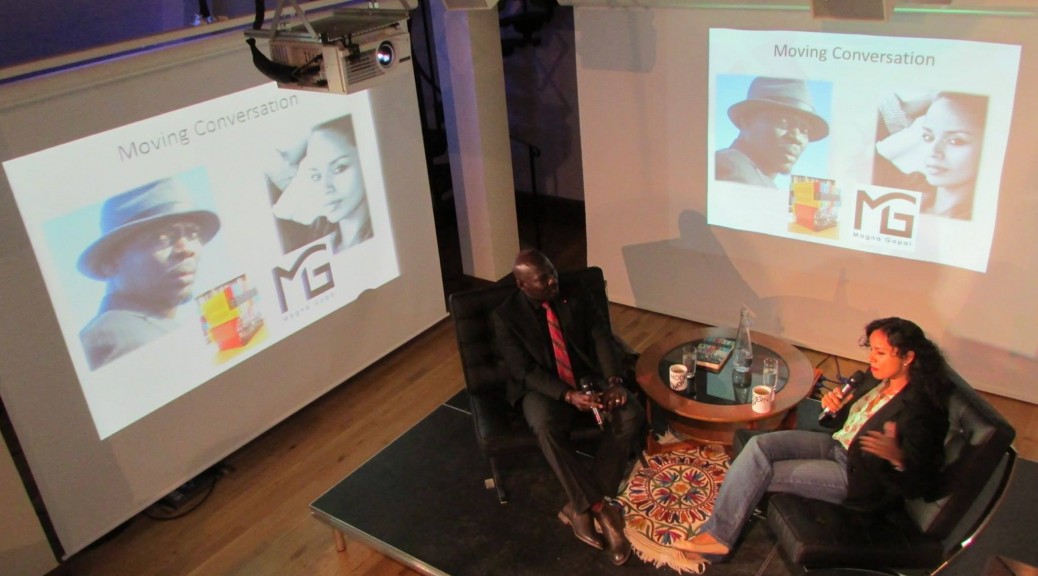 What an amazing evening on the 14th of November, 2014! Once again, the Modern Moves team transformed the Anatomy Museum of King’s College, London, into a space for thinking bodies and dancing minds. Bringing together Professor Ato Quayson of the University of Toronto and Ms Magna Gopal of New York, our first Moving Conversation saw a packed house listening with rapt attention to our guests talking to each about about lives in diaspora and dance, leading into a long discussion on the dynamics of salsa from the perspectives of Ato and Magna. Mojitos and canapés followed as the space was cleared to allow the after party to take off: a brilliant set by DJ HaiHan Tan, also of King’s College London which was enjoyed to the fullest by London’s best social dancers as well as guests from the North of England! Here, now, is the full report!

On November 14th, 2014, a little more than a year ago, Modern Moves held our first Moving Conversation to a packed house in the Anatomy Theater at King’s College London. Shaking up the boundaries the dance floor and academia, Moving Conversations are the bread and butter of the Modern Moves experience. It’s where the dinner party atmosphere meets the dance floor. For our first installment we were delighted to facilitate the improvised brilliance between Magna Gopal, one of the leading instructors and performers in the global salsa industry, and Ato Quayson, Professor of English and Director of the Center for Diaspora and Transnational Studies at the University of Toronto and author of Oxford St. Accra: Urban Evolution, Street Life and Itineraries of the Transnational, now out on Duke University Press.

The two connoisseurs of their respective fields only met for the first time that day, but had an illuminating conversation about dance, origins and sensuality. “I would say that a huge part of my dancing,” Gopal said, “is a result of where I started. I started in Toronto, Canada and the dance culture there is very, very diverse, culturally diverse.” As a woman of Indian background, participating the culturally diverse salsa scene in Toronto allowed Gopal to express herself fully “without feeling that I didn’t fit in because I’m not Latin.”

One element that linked them immediately was the fact that for both of them dance (or writing about it) was not an automatic career path. Gopal, for instance, was pursuing an undergraduate degree in Economics and International Relations but was completely seduced by the salsa scene. At a certain point she started receiving so many invitations to teach that she realized it wasn’t feasible to keep a full time job <em>and</em> travel five days a week to teach salsa. So, like most artists who realize that their passions and their day jobs don’t mesh, she dropped everything and gave salsa a go, risking everything to pursue her art, going against the dreams her parents had for what she might do.

Quayson, who grew up in Ghana, jumped in: “I had to keep my dancing quiet. My father would have strangled me if I told him I wanted to be a dancer. ‘Are you out of your mind?! We all dance!’”

The conversation was animated by several performance clips of Gopal working the dance floor. In one, starring Magna Gopal and Reda, Quayson, was particularly interested in the fluidity of the Reda’s movement. “He’s very fluid – there’s very little staccato gestures. It’s very fluid, and of course you respond to that fluidity.” But the other aesthetic element that stood out to him was the nature of the salsa “shine.”

“The shine is very fluid and is integrated into the dance,” Quayson said, “and there are some shines that are not integrated. But this was very integrated.”

“Reda is a phenomenal dancer,” Gopal responded eagerly. “His background in dance is hip hop, contemporary, salsa and afro, so a lot of his movements are a combination of those elements. In addition to that he’s also very musical. When you hear the song and you see the movement you see that connection. You feel like you’re also in sync. But a lot of the time you see a dancer as one thing and the music as something very different. “

But this “shine” was different from another of Gopal dancing with Gordon Neil:

Throughout the conversation Gopal spoke on the importance of connection on the salsa dance floor and, more, of showcasing that connection to the audience so that the dance can be affective. The most powerful moments were when the two talked about feelings, emotions and affect. In many ways Gopal’s remarks about connectivity were her own “theory” of the dance floor.

“When you’re connected with your partner and you’re connected with the environment and everything is just flowing naturally,” she said, “you can almost feel like you’re inside that other person’s soul. And that connection is profound.” But feeling close isn’t quite as simple as having two bodies pressed together. Two bodies together do not a connection make, as anyone who has been on a bad date knows. For Gopal, that’s the misconception: just because two human beings are touching on the dance floor doesn’t automatically mean they are connected. Physically touching is not the same as <em>being</em> connected, even if that connection is fleeting and only lasts one or two dances before that person disappears into thin air.

Quayson agreed. You can boogie or shake it down, he said, but that’s not the same as connecting, which he felt is an affect produced distinctly in partner dances.

Another crucial element of dialogue had to do with gender, sexuality and sensuality, issues Modern Moves explores in detail. There’s a wide-held idea that women are supposed to be “sexy” in the way they dance, echoing feminist film theorist Laura Mulvey’s famous critique that women’s bodies are nearly always staged “to be looked at.”

Gopal had strong words about the way female sexuality looks on the dance floor.

“Because salsa originates from Latin culture,” she said, “there’s an emphasis on the woman and the sensuality and sexuality of the female figure. I find that a lot of women in salsa are learning that it’s all about how you can showcase your body” – the staging of Mulvey’s notion of “to-be-looked-at-ness” – “and how sexy you look and that that’s what’s going to give you the power and attention. There are many other elements to a strong female beyond her sexuality that include playfulness, that include assertiveness, that include power and strength, not just softness all the time.”

The audience asked engaging questions, particularly picking up on Gopal’s interest in staging a connection with your dance partner. One question wondered that if a connection starts before the dance, are there signs or cues we can read that will let us know that the connection will be a good one? Like any human interaction, Gopal noted, there are just certain people we gravitate towards. Pushing the topic of connection even further another moved pushed the conversation away from the dance floor and towards the stage, wondering about how a connection between dancers performing on stage connect to each other and to an audience.

“If art is constantly catering to an audience,” Gopal said, “no one would put anything out there because there’s always going to be someone saying ‘I don’t like it.’ So the idea is to be as sincere as you can be to whatever it is you’re feeling like expressing and then having the conviction and the strength and courage to put it out there.”

At the end of their lively discussion, in true Modern Moves style, we served Mojitos and canapés, shook it down, boogied, and danced to salsa with a special set by HaiHan Tan, a salsa fanatic and (at that time) a doctoral student at King’s. Now, with this year’s installments of our academic dinner party, the best is yet to come.

For more on our Moving Conversation series, see here! http://www.modernmoves.org.uk/moving-conversations/