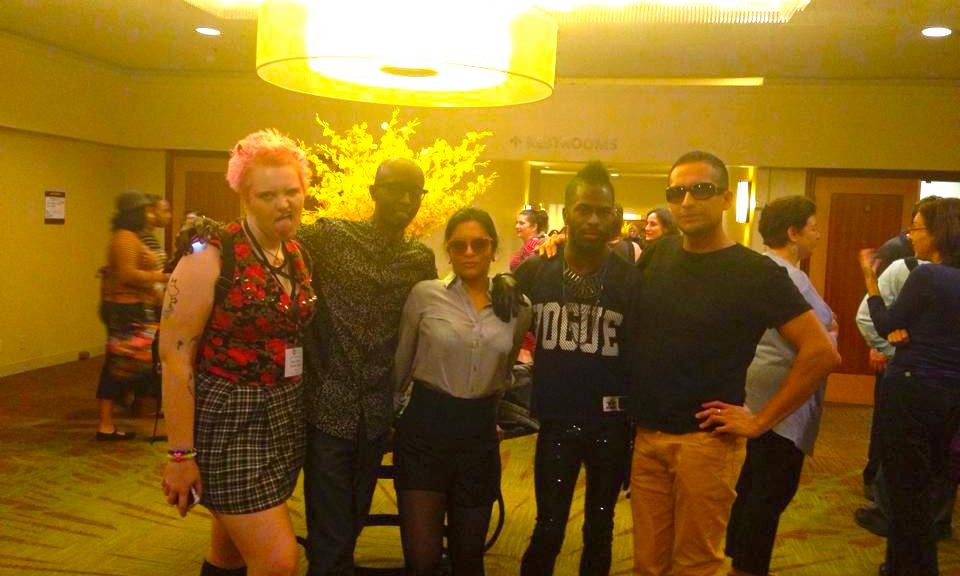 Why do we need parties? What (or who) makes a great party? What energies does it unleash? How is it a change maker in the world? On the 7th of November 2014, I joined Madison Moore at a boundary-crossing panel discussion on ‘music, fashion, and the power of (queer) nightlife’ that he organised for this year’s American Studies Association conference in Los Angeles. Madison brought together for the occasion professional academics (me, Matthew Morrison, and Victor P. Corona—both of NYU), and professional party organisers: Amy Cakes , who organises the weekly Tuesday night party in New York, Westgay, and Loren Granic and Gregory Alexander of LA’s legendary pansexual night A Club called Rhonda. As the academics revealed themselves as inveterate party goers and the party organisers came out as keenly analytical observers, that set of boundaries was set to collapse from the very start, and things only became better in the course of the discussion.

Madison had instructed us to flaunt ‘a strong look’, and, collectively, it was all there— monochrome punctuated by red-rimmed shades, yellow trousers, and flaming pink devil’s horns; stilettos heels, flower prints and necklaces (for the men); a bit of a schoolboy look (for me). Probably inspired by our get up, we enjoyed a fantastic conversation on all aspects of nightlife, transgression, resistance, and utopia, adroitly managed by Madison as panel host. The thoroughly engaged audience was bursting with questions and comments and the allocated time slot went by in the blink of an eye. We were, I asseverate, the most fun and furious panel of a conference dedicated to ‘the dialectics of fun and fury.’ Indeed, we were the fun and the fury.

Madison started us off by asking each panellist to recount a memorable nightlife experience of our lives. Despite the diversity of our tastes and preferred scenes, a similar pattern quickly emerged: personal journeys of escape and rebellion where each panellist recounted how one party, a single door opened into an alternative world, allowed an epiphany of self-understanding at a threshold moment (usually, unsurprisingly, our teenage years or early twenties). That first party showed us the way to work against the (often benign, often invisible) policing of our lives by family, state and society, It was almost like each one of us had embraced the feeling of being enveloped in nightlife, and the possibility that during a good party night, anything could happen—in order to make possible what we wanted to be– which was, in one word, different from whatever it was that surrounded us.

Partying was about transformation, our stories conveyed: the transformation of an ordinary person to a hyper-self, in the company of like-minded people, to forge a protean community where there were only atomised units before. Whether through social dancing, finding unlikely cultural muses in the form of underground party hostesses, dressing imaginatively, or simply dressing better—partying made, in Matthew’s words, ‘a certain kind of energy go through my body’ as he discovered ‘monumental clubs in Atlanta which were havens for black, brown and queer people.’ So the stage was set for more theoretical explorations of what gave nightlife this potential for resistance and radical self-making, punctuated always by the personal anecdote, photos from one’s personal archive, or the soundtrack of a personal anthem.

Gregory told us how a good party had to have a peak moment- whether it was (the simulation, we imagine!) of the sacrifice of a virgin covered with vodka soaked fruit, or the orgasmic explosion of a glitter-filled ball; for Loren, the art of throwing a good party was ‘learning something from the elders and passing it on.’ These articulations converged to expose the party as ritual—where the bacchanalia is actually part of a deeper solemnity, indeed a necessity that has always been part of human social organisation. Matthew, in turn, spoke eloquently of work and labour unfolding through rhythm, of the party as reconnecting the sacred to the profane.

Special lighting effects, amplified sound, infrared vibrations coursing through one’s body, and altered and heightened sensibilities, with or without ‘a little help from one’s friends’ –ecstasy in all senses of the term- emerged as manifestations of ritual as the central aspect of dance. The transformations enabled were just another form of possession, the intake of substances as aspect of transformation a sacramental necessity. Through these analogies, we came to the collective understanding of partying as a form of religious expressivity. The panel anchored this seemingly Jungian flight of fancy to the historical connection between the Black Church and house music: ‘the DJ takes you to church’, as Loren reminded us.

Indeed, a recurrent theme was the collaboration between black, Latino and queer subcultures in creating a zone of micro-level resistance to the metronomes of capitalist time. The racialised, radicalised, always queer body is inscribed with a history that unfolds through the polyrhythmic possibilities inherited from the slave’s percussive language. In the push and pull of commodification that comes with capitalism, the dance floor’s radical histories are always in danger of erasure and submergence. To bring them back to the bodies on the floor, to unite those bodies in political pleasure and pleasurable politics, is the duty and responsibility of some figures specifically associated with a good night.

The panellists agreed enthusiastically that the DJ is the techno-shaman, the club is the church, and the turntables are akin to the sacred Afro-Cuban bata drums. These perspectives confirmed our sense of the ritualistic space of the dance floor. But like all rituals, energy has to be managed, and for this, the DJ is key. The DJ booth is a sacred space, a vodou poto Mitan, and the party’s end goal is transformation through the optimal channelling of the crowd’s energy. Loren, describing himself watching a diverse crowd from the DJ booth, being reconnected – by him- to the queer, black and Latino roots of the dance floor- by his choice of the very music that was played in mythical New York clubs. ‘It’s a beautiful thing to show people that super rich history.’
In the process, the crowed is enfolded into that history, made part of it. This is what I, too, love about the dance floor- its ability to collapse the time of history into the time of the now. And it isn’t just the music that is important here, but the aesthetics and the mood, starting with the door people. Thus the host of the party emerges as another key player. For Amy, presiding over a party is an ‘out of body experience where I’m hovering and watching- I’m providing a service to people, providing a space for them to transform and change their lives.’ At Westgay, she invites pioneers from earlier party scenes. Vogue legends come in to teach people how to ‘do it properly’. Through such cultural transmission, an oral, ephemeral and underground history is passed on to new generations.

The promoter also emerges as an important player in ensuring theatricality and spectacle at a good party. Drawing on his experience of ‘A Club Called Rhonda’. Gregory Alexander described how, if working a look is the return of energy, it is equally important to work the club’s look. ‘Hours of work and lots of money’ goes into putting in the energy and expecting people to return it. This ‘return of energy’ usually takes the form of flamboyant and individualistic dressing up—often as a way to express- and balance- one’s masculine and feminine sides. Rhonda, a fictional character that comes out of Gregory and Loren’s combined imagination, is a ‘superbeing’ who is part of every clubgoer, whether gay, straight, or of any other form of identification.

The Rhonda party logo of a pair of legs, which harks back to a nylon ad from the 1950s, reveals the dual tendencies of self-fetishization and nostalgia that encapsulates the promoters’ attempts to create a safe space of shared love of spectacle. The party promoters agreed that they encourage and reward those who make the effort ‘to come to the tenth degree of themselves’. The conversation confirmed that parties like Rhonda fulfil a deep need to find spaces that ‘let people do their thing. To ask why is there such a need is to go back to the party as a space for resisting the commodification of pleasure that is an intrinsic part of the capitalist machine.

Indeed, if dress codes are the hallmark of capitalist formations of a docile workforce, and the moulding of the modern subject by patriarchy and heteronormativity, a party helps us break those shackles even momentarily. Through some powerful images of ‘club kids’, Victor reminded us of the provocation of the party goer traversing public space through the subway ride to the party, all dressed up, or back home. The utopian impulse of the party can be best realised not by niche scenes, though these are important to nourish safe spaces for a range of alternative subjectivities, but, by the need to break segregation in dance life.

A club, Loren said, should push boundaries and allow people to be what they are not allowed to be by social norms, that are, ultimately, the pathways to creating the docile subject. Yet a party is not a contradiction-free utopia. As some audience members spoke of the very real possibility of violence that surrounds party culture, I was reminded of Jacques Attali’s thesis in his book Noise: A Political Economy of Sound that all music contains in it a form of violence, a necessary rupture before we move to a new state of reconciliation. While the physical space of the club and its interpellation in specific material conditions puts pressure on the idea of utopia, it only confirms that a party is always a space of contradictions: is it about glamour or post-glamour? Danger or safety? A place to be exhibitionist, or a place to blend in and be invisible (and comfortable)? This is, perhaps, the reason that the best parties are often in spaces on the brink of transformation through gentrification. The party, full of the energy of possible transformations, is a place where we can say, with New York’s DJ Juliana, ‘my entire being is a resistance to culture. I am the middle finger to normality’.