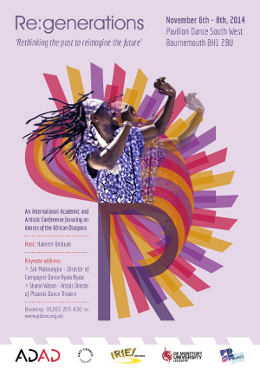 On November 6th I headed to Bournemouth to for ADAD ‘s (Association for Dance and Diaspora) conference ‘Re:generations: Rethinking the Past to Imagine the Future’. Throughout the three days, a combination of keynote addresses, panel discussions, papers, performances and workshops were to explore dance and the African diaspora. From the starting point of the significance of the histories of dance practitioners and companies, reformulations for future development in African diasporic forms was to be imagined and built.

I was curious about how the diaspora as well as ‘Africa’ was to be negotiated with such a big line up of practitioners and thinkers from all over. Arriving in the coastal town of Bournemouth on a cold, windy and stormy day gave the diasporic identity of the conference a special feel and as I walked towards the South West Pavillion, the restless waves and the stormy skies brought a scenery within which the vastness of diasporic dance and identity would unravel. I was welcomed at registration with a schedule for the following days, and a box of Vitamin D tablets. And on that stormy day, the longing inherent in diaspora resonated through the function of those tablets, the lack and the appeasing of that which the sun so gracefully gives.

The conference worked as both a playground as well as a springboard for dance forms and identities. The topics ranged from all sorts – histories of British-based dancers who are Black, generational dialogues, connecting dance and the African Diaspora internationally, Africa and the Caribbean in British dance, as well as the evolution of African dance and music forms in the diaspora – and finally the pedagogy of teaching Dance of the African Diaspora.

The diversity of topics explored also made visible the lines that separate differences within the African diaspora – the ways in which diaspora was negotiated and what kinds of ‘africanisms’ unfolded or reaffirmed themselves. If movement is always subject to contagion by its very nature, how dance forms have negotiated space and how closely tied they are to identities – national or transnational affirmations – make them slippery and subject to change. Of course the ‘Africa’ which ultimately ties the whole conference together is seemingly more than an imaginary – it becomes the very thread that sews together the whole as much as the seeds that sprout new -isms. Understanding how this certain notion of rootedness was central to many practioners – uprooted themselves – lent a lens for the direction the diaspora were to move into – tied to a continent. This was specifically fascinating, where rootedness and Africa seemed to be a guideline for the purity of dance, but with the diaspora still as the seed. The reconstruction of ‘Africanness’ then entailed a variety of different subject positions and political issues. The claim of movements or dance sequences becomes central when claiming identity through the diaspora not only in African diasporic dance forms, but in ballet and contemporary dance which often ower unacknowledged debts to Africa. The masterclasses replicated this specifically, about the claiming of movements as one’s own – where the re-creation and re-interpretation then worked as the separation line between many practitioners.

This symbology of Africa made me wonder, how the diaspora feels tied in the ancestral sense and through the present. In any case, the body is the reception and expression of these Africanisms and the faith within the symbology itself undoubtedly is what keeps the rhythm of the body moving.