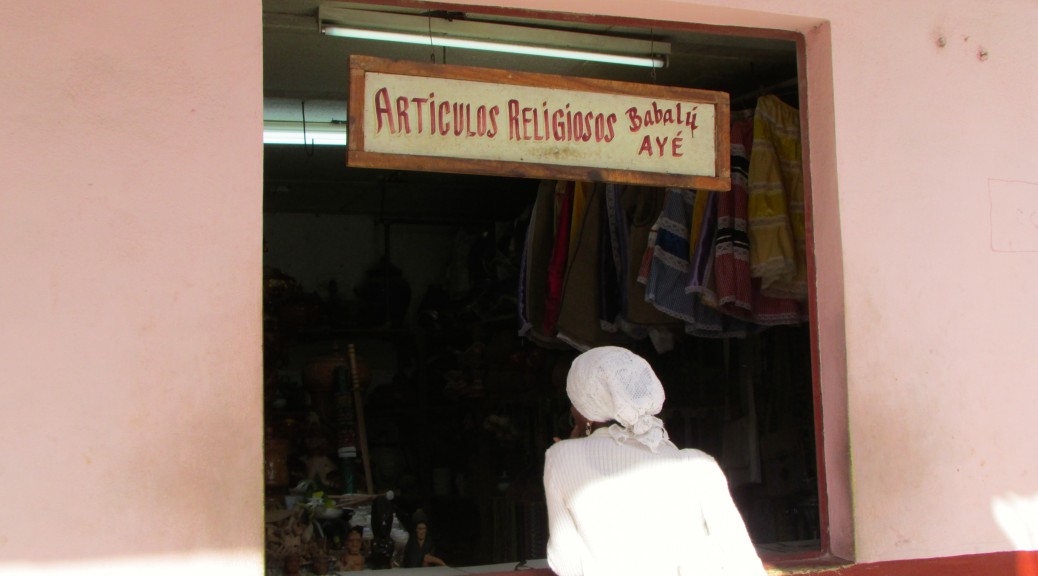 This week, Elegua opened the doors.

I changed a bit the orientation of my research strategy and I multiplied the efforts in such a way that I seem to have reached the turning and decisive point when the field allows you to be part of it.

I can now take at the right Cuban price a ‘taxi collectivo’ (that means taxis reserved for Cubans, payable with the currency reserved for Cubans). I am quite proud of this precious improvement! Indeed, when you are coming and going all day long throughout the very extended city of Havana, this makes really a big difference.

As a fieldwork rule, this week has also deliberately been placed under the sign of improvisation. Interestingly enough, as both an ethnomusicologist and a Modern Moves team member obviously interested in the mechanisms of improvisation in music and dance, it is also something you have to deal with while doing fieldwork. Indeed, even if I made a quite precise plan of what I would like to achieve for each week of my stay, each day never happens as planned. I also found other interesting and quite moving documents, like the thesis made in Spanish by one of the Malian members of the group Las Maravillas de Mali about a Malian performance genre; or again Odilio Urfé’s handwritten corrections in his manuscript about the African influence in music and dance of Cuba.

Among the persons I met and had interviews with, the most luminous moment of this week was certainly the meeting I was lucky to have with Manuel Egües, the son of well-known flautist Richard Egües of the mythical Orquesta Aragon. I spent a half-day with him, recording a one-hour interview in Spanish, watching photos of their tour in Africa, and listening to old recordings of the famous orchestra. He was so generous and happy to share his knowledge that he spontaneously provided me with some extremely interesting recordings regarding Orquesta Aragon’s stay in Mali in 1973.

It is exactly through this kind of generous encounter, and meaningful and precious moment, that you become aware of the usefulness of what you do. I felt blessed indeed when he told me how grateful he was that a young European woman was interested in such things important for him to transmit.
With all the information I got about Orquesta Aragon, I should be able to meet the band next week, fingers crossed, and hopefully have an interview with one of the oldest members still alive who has known Las Maravillas de Mali when they were in Cuba.

Regarding music and dance activities, I really would like to be like Eshu with his gift of being everywhere at once, as there are so many things happening at the same time here! At least I can almost every day manage to attend a ‘matiné’ of one kind and a ‘noche’ of another. ‘Matiné’ means that the event takes place between 5pm and 9pm and ‘noche’ between 11pm and 3-4am, knowing that in reality live concerts barely start before 1.30 am. I attended various kinds of concerts and dance events in different places, the size of the venues varied from the large Casa de la Musica to the smallest alternative-like theater for an intimate trova and poetry evening. I experienced a vast range of Cuban music, from son, trova or bolero to reggaeton and timba via abakua and guaguanco and I danced salsa to the energetic sounds of NG La Banda and Pupy y los que son son. I was invited to some of these events by musicians or dancers that I had met, and, without these intermediaries, it is unlikely that I would have been able to find certain unusual places. I received other invitations for next week and, among others, I should be able to attend a Santeria ceremony. Indeed, even without looking for this, I have encountered several manifestations of Afro-Cuban religions, whether it be in the form of small or impressive altars in a room corner of a house or during some of these events that I’ve atteded. Altar in a Babalawo’s house I am now about to go to Callejón de Hamel to get my henceforth necessary rumba fix — with the positive feeling of a forthcoming week full of promises of interesting encounters and findings!