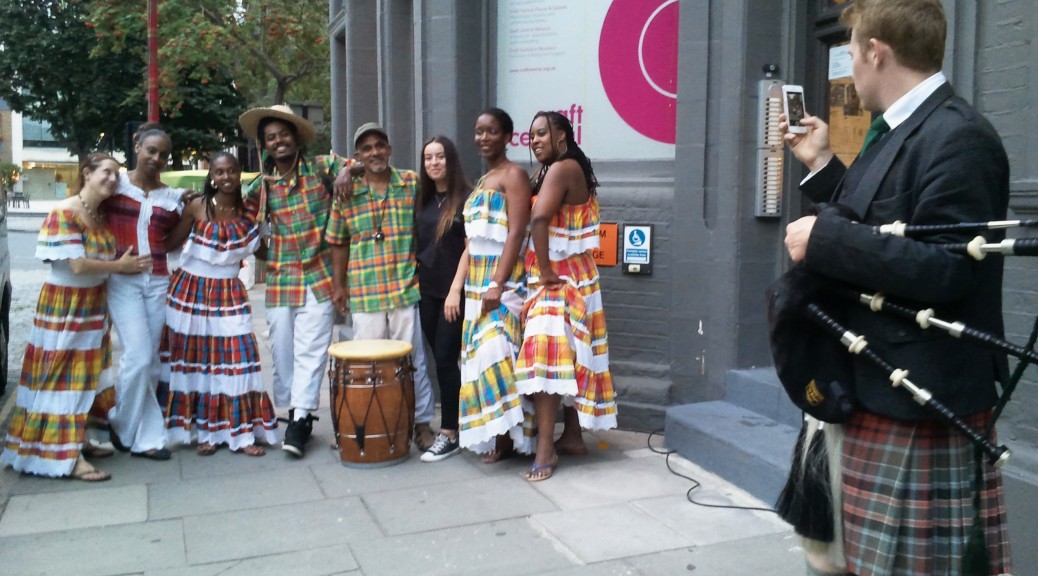 Postcolonial tartan: we heard its sound before we saw what it looked like. The distinctive sound of bagpipes directed us towards the East London square where the Costume Institute of the African Diaspora were launching its first exhibition: Travelling Tartan. As we drew closer, we heard the djembe in the mix. A kilt-clad bagpiper jamming with a drummer wearing batik-printed ‘bazin’ fabric! The unexpected beauty of this sonic-sartorial encounter brought to life the routes through which Scotland, India, Africa, and the Caribbean met and mingled during the dark centuries of expansionism, colonialism and empire.

This valuable work of retrieval, of celebrating stories lost in the grand narratives of national history, is what makes the work of CIAD so very precious. This work takes its inspiration from the remixing of much-travelled cultural practices in the postcolonial present, layered by multiple diasporas. As Teleica Kirkland, creative director of CIAD announced while welcoming us, ‘sometimes the Caribbean is thought of as second hand, poor. I feel, looking around here, we have power and we have gravitas.’ Power and gravitas indeed, without sacrificing style!

Resplendent in her own purple tartan dress, Teleica was the embodiment of her words. Her dress, which she made herself, paid homage to her female ancestors, who sewed for a living but used their creativity to define themselves as stylishly as possible. Slavery, displacement, re-making of the self: Teleica once told us how she draws on the ‘creative energy that comes from those darker histories– because your work is your personage- you keep creating- constant cycle of death and birth.’

For Teleica, the Caribbean is ‘boundary-less’. How wonderful to hear this philosophy of the Caribbean’s fractured yet endlessly repeating self manifested in practice. While celebrations of Caribbean culture in the UK tend to focus on the Anglophone Caribbean, CIAD is firmly invested in crossing the linguistic barriers that often prevent an overview of the region’s shared histories of creolized song, dance, music, dress and food. So fitting, then, that the djembe-bagpipe duo was followed by dancing, drumming and chanting by the French Caribbean rhythm makers Zil’oKA, with whom Modern Moves had enjoyed an afternoon not so long ago!

Zil’oKA’s members proudly flaunted a splendid palette of Madras fabric: the dancers in headscarves and traditional dresses, the drummers in colourful shirts and, in the case of the lady drummer, a most fetching ‘modern Madras’ outfit from Guadeloupe. Their performance transformed the square into a living, breathing, moving enactment of the travels of the tartan and its continuing relationship to music and dance. Nature too obliged- that most Scottish of trees, the Rowan, was transformed into a guardian spirit of the square, its trunk wrapped in an orange and green Madras that echoed its clustered berries.

And there was food, of course, to remind us of that other sphere of creativity which emerges from survival and the need to create and enjoy life in all its dimensions. Rum punch, mini-patties, barbecued skewers, tropical fruit, little pastries with mango and raspberry toppings, fried shrimp— the point of this litany is not merely self-indulgence, but to point out how beautifully micro-managed the launch was. The organisers looked after all the desires of the guests and made sure that our different senses were equally pampered and kept busy!

The exhibition itself is taking place at Craft Central, a small but very attractive Victorian building in Clerkenwell. CIAD has used the space beautifully. Mannequins draped elaborately with variations on tartan fabric, or wearing Madras-based national dress from different islands, alternate with bolts of checked fabric—tartans, Madras, and even lungis from South Asia. If you want, a member of staff will even show you how to tie a flamboyant headscarf with multiple peaks and knots in the manner of the islands of old!

And tartan continues to inspire: also on display is a crazy tartan poncho and bag designed by Vivienne Westwood, conversing with a lovely gown of Jamaican bandana and Madras– a prizewinning design by a 15 year old London schoolgirl. Panels describe the forms taken by different takes on the tartan from East and South Africa to the Caribbean via India. To follow the tartan is to traverse once-busy, now forgotten, imperial routes. Who could imagine that a product of cold Scotland would morph into this riot of tropical checks!

The exhibition is a sensory lesson in the unexpected cultural developments that flourished through the webs of Empire. While imperialism was a machine to which humans were subordinated, creativity always found an outlet for self-expression. Resistance and style are intimately connected. As we left with goodie bags filled with little Scottish-Caribbean delights—rum and whisky, the mainstays of colonial outposts and postcolonial revelry (today, more ‘Scotch’ whisky is produced in India than in Scotland)— the tartan-clad ghosts of Empire seemed to come alive through the windows of Craft Central.