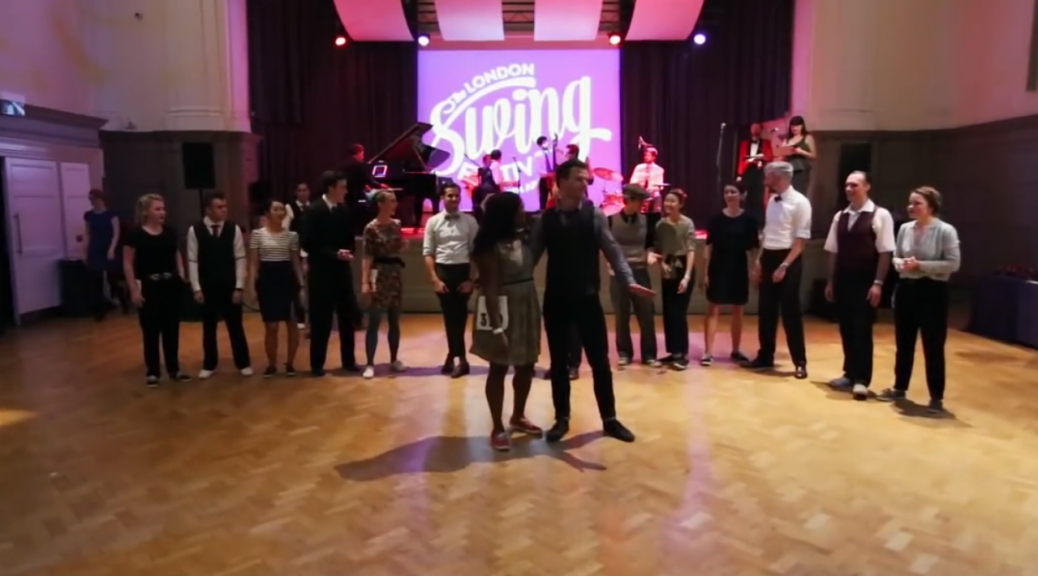 ‘Frequently when watching variations of the Lindy Hop in the Savoy Ballroom, I have seen individuations that might have come directly from folk, even tribal areas’… So observed Katherine Dunham in one of her essays of 1941, ‘The Negro Dance’, written soon after her pioneering field research in the French Caribbean and Jamaica researching different kinds of Afro-diasporic dance.

I have always considered Katherine Dunham a goddess-guru figure, and I’ve always longed to dance the Lindy Hop, but I didn’t imagine that- like her- I would find myself one day in the midst of a packed room of Lindy Hoppers, making observations on the similarities between Lindy Hop and traditional dances of the Caribbean islands.

And how appropriate that it was the folkloric dance from the French Caribbean that should have led me to the Lindy Hop party where I found myself recalling not just Dunham’s words, but all those videos of classic Lindy Hopping on You Tube, which at a certain point in my life (writing the grant proposal that made Modern Moves a reality, to be precise) I watched obsessively!

It all started with yet another fabulous class in Brixton with the London-based dance and drumming group Zil’oKA one Saturday (30th August 2014), which focused on ‘mende’, the Gwoka carnival rhythm from Guadeloupe. As an enthusiastic group learnt an energetic choreography full of high kicks, jumps and lunges, one of the participants commented how close these moves were to certain steps of the African American vernacular tradition. As Erica demonstrated the parallels between the Mende steps and the Cakewalk, I felt transported to research heaven.

Afterwards, we sat in Brixton’s Windrush Square, eating delicious Venezuelan arepas and chatting about African-heritage social dances. My new friend turned out to be a Lindy Hopper! And she was going to a Lindy Hop event that very evening— before I knew it, I was clicking ‘join’ on the FaceBook event page for ‘Stop, Drop, and Rollers’. It didn’t matter that I had never taken a single Lindy Hop class—I would simply observe (that’s the best thing about dance research—it saves you from feeling neglected or out of place on the dance floor. ‘I’m taking notes, don’t you know?)

So now it was 8.30 pm on a Saturday night and– while I was getting ready for a night of salsa at ULU to celebrate MamboCity’s 15th anniversary of party-throwing- I was also multi-tasking for my Lindy Hop pre-party. At Windrush Square Erica and I had chatted about the difference between the salsa and Lindy Hop scenes—never the twain would meet, it would seem from that conversation. Ironic that I was doing both the same evening, and trying to devise a look that would work for both!

‘No heels’, Erica had warned—music to my ears, as I prefer flats any day. I had my salsa shoes in a shoebag and some flat pumps on my feet. The ULU party theme was ‘black and white’. Typically, the only suitable clothes I had at hand were my white Raghavendra Rathore Jodhpur pants and a black t-shirt emblazoned with the ‘Brazouka’ show logo. Not really a conventional salsa outfit, but I’ve been dancing salsa long enough to know what works for me. I’ve even danced salsa in a sari on several occasions recently…. But a new scene—that’s quite different!

At least with my idiosyncratic clothes no one would identify me as coming over from the dark side. ‘Too much booze and sleaze’ is what, it seems, some Lindy Hoppers associate with salsa dancers. Plus passing as Brazilian (which is what I am often assumed as being in Latin dance circles) always helps as Brazilians are considered by most to be charmed dancers. I pushed some faux-Amazonian earrings through my earlobes and hoped that they, together with the ‘Brazouka’ t-shirt, would make me appear a slightly less weird alien to London’s Lindy Hoppers.

When I arrived at the party I realised that there was no way I could fit sartorially. I seemed to have entered a time warp of sorts. The women were nearly all dressed in little printed or polka dotted frocks and flat canvas pumps. The men were preppy – waistcoats, pleated trousers, ties, flat caps. Everyone was boogieing as though it was 1922. Percussively, I was in 4/4 land. A live band called ‘The Dixie Ticklers’ was playing jazz and swing. The crowd was heaving and the standard of dancing, simply amazing. I sat down at a window seat and simply gaped. Surreally, the venue was the London club Nomad, where I often drop by on Wednesdays for a long-running kizomba night. Talk about multi-layered dance scenes! Angolan kizomba, with its small, discreet moves, much-vaunted ‘connection’ deriving from close body contact, vs. Lindy Hop, the classic swing dance from Harlem, showy, stomping, acrobatic, and lithe. And the demographics- the kizomba night’s predominantly black crowd vs. this party’s mostly white dancers (I spotted one black woman and one South Asian man).

There was, however, a star couple from Korea, and who, in their matching Burberry checks, were dancing up a funky and humorous storm. Watch them here competing at the Lindy Finals of the 2014 London Swing festival!

Where did the black investment in Lindy go, I wondered, not for the first time. And where were the hips in this Afro-diasporic dance? The energetic bounce, kicks, and twists of classic Lindy kinesthetics seemed to have banished all lingering traces of the ‘ginga’ and ‘bunda’-aesthetics of the kizomba-world that populated this very room each Wednesday. But I didn’t have time to wonder for too long—for, to my delight—a friend of Erica’s (‘a dance polyglot like you’, she said) was coming up gallantly to ask me to dance. And—I was away!—dancing my very first Lindy Hop to the sweet sound of the Dixie Ticklers! The night turned out to be pretty fabulous, actually. The songs were long, and I danced for about an hour. How did I do it, without a single class in the dance genre? Well, firstly, by being a good listener—to the rhythm of the music as well as its accents for embellishment; secondly, by being a very attentive follower— even on more than one occasion, faithfully mirroring my leader; thirdly, by letting go all restraint and fear of parody and recalling the moves of the Harlem Lindy Hoppers in the YouTube videos. ‘I can’t believe this is your first time’, said more than one dance partner to me. I was so gratified!

I tore myself away like Cinderella to make the midnight cut off point for entry to the ULU salsa party. It was the first time probably that I was entering a salsa party drenched in sweat from another form of dance… and with the moves of that dance form still imprinted on my muscle memory…. But it worked to my advantage, for, as I found myself dancing in a pachanga style it now felt to me like a speeded up Lindy Hop. That was not at all surprising given that the pachanga (which developed in response to evolving charanga music from Cuba), like the Lindy Hop several decades before it, crystallised in the dance crucible of uptown New York.

That Saturday was one of my best dance nights ever, as I finished with some crazy improvised bachatas in the kizomba room (why those dance styles are made to share a floor is another story, but it worked for me)—it was really a night when 4/4 rhythm showed me its hidden magic. Of course I had some fantastic salsa dances too and if one adds the great Zil’oKA class to the mix it was altogether a day that London had allowed me to cross all kinds of Afro-diasporic rhythm worlds in the space of 12 hours.

My unexpectedly lovely evening and the warmly welcoming Lindy Hoppers made me think how, all too often, we are curious about dances we don’t have expertise in or knowledge of, but feel too shy or inadequate to explore them. There are many people who are content to shine in one partner dance—and that’s absolutely fine; but others who might want to branch out are restrained by thoughts like ‘I’m going to look like an idiot’ and ‘I won’t know what to do’.

But expertise in one partner dance lends itself to another form more easily than we imagine. And a party should be a space of enjoyment, fun and experimentation. So– if you dance any form of couple dance with Afro-diasporic history, and are yearning to try another one—don’t miss an opportunity that may come your way! Your training in leading and following, turning and—most importantly—syncopation and breaking— will stand you in good stead.

Of course, it may be easier for followers than leaders, initially, to dip in and out of different dances. If you find yourself dancing with a man who is doing stuff you don’t really know, if he’s a good leader and you’re a good follower, you will do exactly that—follow. Which makes me wonder: at all those Harlem venues, when sounds and moves from Cuba and Puerto Rico mingled with African American sounds and moves, it must have been the followers—mostly women—who would have been the first meta-improvisers, those who would have found the space where these Afro-diasporic traditions met and transformed each other.

Another way to think of the power dynamics of so-called ‘leading and following’! In the meanwhile, I certainly shall be seeking out more London Lindy Hop parties….!