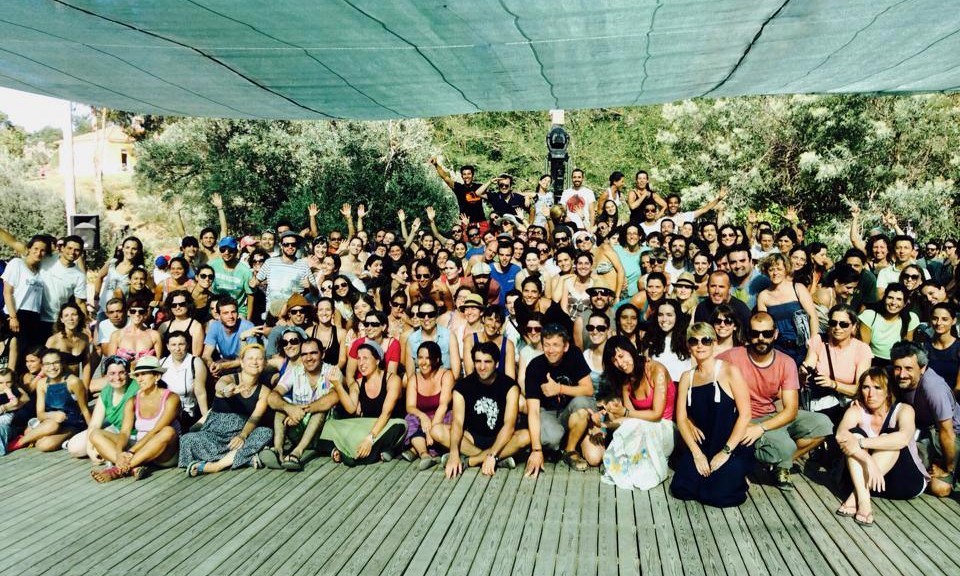 Coming back from Andanças Festival 2014, my strongest wish is definitely one of sharing this experience –- the most recent one of four equally rich and different previous ones — with everyone who is still unaware of the existence of this amazing event.

Andanças is a Festival both for people who don’t dance, but would love to try, as well as for dance addicted people of all kinds; at the end of the experience all the participants seem to fit magically in the same category: enjoying the pleasure of dance in its most authentic and sincere dimension. This festival, which is not a mainstream one, is known to be the favourite of both top artists as well as beginners in any domain for its simple spirit of authenticity and for presenting dance in its most sincere face: as the natural means of communication between human beings, without falling into the cliché of the monothematic dance festivals market, in which sensationalistic choreographic production is privileged, while the original message of the dance language and context are not always preserved and promoted.

Existing from 1996, Andanças is one of the oldest events of this kind in Europe. The festival, characterized by the principle of respect for nature and eco-sustainability, and already realized in Évora, Serra da Gralheira, S. Pedro do Sul e Celorico da Beira, from 2013 takes place in Castelo de Vide in the Alentejo region, without losing the enormous number of followers that in all these years made it a great success frequented by people from all Europe.

Organized by the association Pe` de xumbo, literally: heavy foot – association for the promotion of traditional dance, http://www.pedexumbo.com/pt – “Andanças festival promotes music and popular dance as privileged vehicles for learning and mutual exchange between generations and cultures.” Quoting form the site Andanças.net : “Andanças’ aim is the one of renewing the social habit of live music and the practice of popular balls through the multiple approach of different traditional Portuguese and world dances, in order to investigate and preserve musical and choreographic traditions and crossing them with contemporary elements”.

At Andanças it is possible to learn more than 50 different dance styles among which are: traditional African, Brazilian, Hawaiian, Aztec dances; African, Brazilian, Latin-American and American couple dances and the various European dances: Portuguese, Polish, Scottish, Irish, Hungarian, Balkan, Basques, Gypsy, Baltic, Belgian, Italian, Gallegan, Catalan, Renaissance dances; as well as Hip-hop Breakdance, etc. The ideal aim of such a rich offer is to stimulate curiosity towards their differences and to emphasise the relation between popular music, dance and cultural identity.

Apart from the immense number of dance styles presented, every day and night from the early afternoon till the last hours of the night various live concerts of bands from Brazil, Cape Verde, Portugal, Italy, Hungary, Spain, France etc. took place in the powerful context of the Portuguese forest.

Music and dance from the widest international context are the core point of the event; nevertheless a lot of other activities are offered during the festival and are always followed with equal interest and excitement, some of them are for example the atelier of music and chant, building of instruments, painting, massage, activities for children, meditation, Yoga, Tai chi and Chi kung, conferences, cooking and exchange of recipes, geologic excursions etc.

In the beautiful context of the eco-respectful camping structure the festival hosts a large number of tents of artisans selling their handmade clothes, shoes, jewellery and organic beauty-products as well as some biological, regional, vegan restaurants, some tents for massages and reflexology.

In past years, I followed my specific interest in couple dances and traditional dances from different areas. But this year my visit to the festival was motivated by another curiosity and I was sure it was the best place to find answers and completely new and inspiring questions. The festival being a special stage for the promotion of the best dance professors working inside the Portuguese territory – apart from attracting some other foreign professors of equally extraordinary level – I was really counting on the possibility to spend 4 days in contact with professionals of some –for me – new areas of interest in order to explore specific codes that I had never approached before. My interest was the one of observing and analyzing the different European group dances, trying to verify any possible theory about their development in the direction of the most modern couple dances and, at the same time, to apply some comparative observation with the oldest example of Contredance from the different European regions.

My purpose was obviously not simple. Moreover, this focus on dance phenomena which are now completely preserved and seem to be at a static point of their evolution may seem strange. Nevertheless the observation of these dances and of the development itself of group dances through the European territory became a very important point in the general interest for the evolution of African dances: being their influence on the African dance context globally recognized but not yet exactly demonstrated by mean of exact comparisons.

What was interesting to me was not, of course, to reconstruct a possible genealogical tree of some dance structures, but more to analyze which more evident element had been preserved in the passage from one continent to the other and which evident changes had been made on the geometrical structure of the dances, on the rhythmic interpretation and execution and which general attitude toward the body movement had been inserted on the general pattern.

This kind of observation can’t be completed in one week, and with a few hours of observation, nor with some moments of conversation with the different teachers, but the experience really gave me some clues about the travel of the dances through Europe and towards the other continents, passing from body to body, most of the time without even using a physical contact, but just observing from far, translating forms that were coming from very different kinetic structures and habits.

Some of the questions are still open, and will stay open probably, like the question of the specific steps of the evolution from these group dances to couple dances –which didn’t actually develop everywhere on the European territory and didn’t give birth to a variety of species that can be comparable to the richness of the original recognized group dances of the specific areas. Some questions could be absolutely new: which specific element in the kinetic code of the African dances determined the choice of privileging a couple dialogue in the interpretation of this kind of rhythms? Was it only symbolic? How might the representation of the couple in the two different, African and European, codes of group dance be compared and what might the differences be? This was the challenge, still open… and in this direction I decided to focus my attention.

In the beautiful and labyrinthine landscape of this exploration I found myself experiencing the similarities and contrasts of the European Mazurka vocabulary and the Creole Mazurka, completely fascinated by the transformation of the rhythm and the equivalent evolution of the movements.

Lost in this experience I’m still reflecting, about the sweetness and vivacity of this dance still visible in the contemporary African couple dances like Zouk and Kizomba, and about the necessity of a direct body contact that this dance was already demanding.

In the Andanças festival we can find some basic principles that describe the most authentic root of the dance phenomenon, “We want to continue recuperating the experience of the social dances as celebrative form of social cohesion” in the respect of nature, in respect and celebration of life, of culture, with simplicity and creativity educating to the development of consciousness, to the development of local economy, activities, production. With the ideal of building a community which could be sensible to ecologic issues and social dynamics, giving to people instruments that they can take home and use for their own everyday life, and bring back here again and pass them to others.

All this believing that dance is a tool, not only for the representation, but also for the foundation of a social harmonic structure.