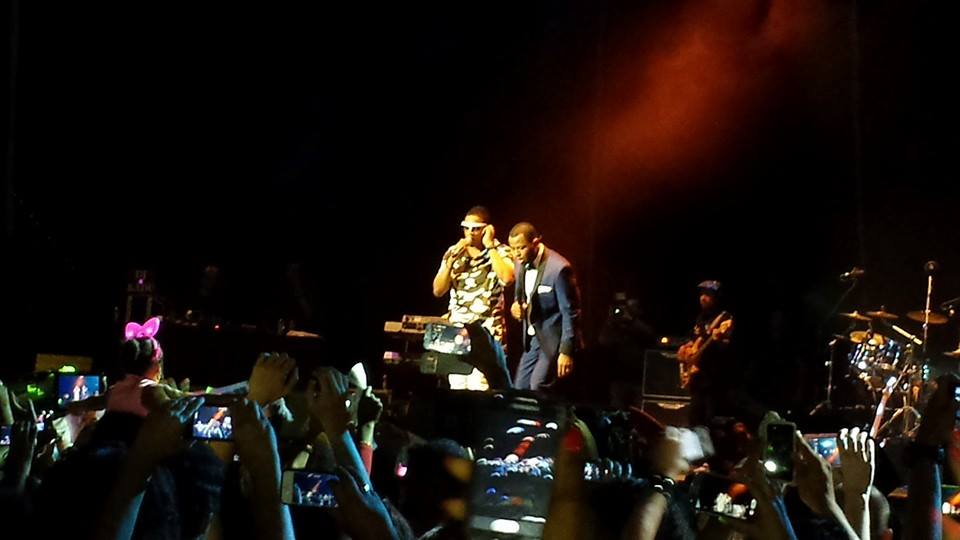 The Meo Arena, with a capacity of 20, 000 people, was almost packed last 19th July for the concert of the celebration of the 20 year-long career of Yuri da Cunha. This was an incredible show of three and a half hours, during which he shared the stage with the most important artists that have collaborated with him and have contributed to the development of his artistic identity.

This was a show that did not need to depend on elaborate scenic production: instead, it opened with just two female dancers presenting movements from traditional Angolan dances, to testify since the very beginning the artist’s emphasis on the importance of Angolan popular and traditional roots for his own work.

The Angolan singer made this concert an authentic homage to Luso-African rhythms: the first round of music presented Yuri’s classics and ended with the powerful performance of the Mozambican singer Lizha James, whose “Quem te mandou“ got the audience really excited and made everyone get up and dance.

During the first part, we enjoyed some of Yuri’s best known songs– “Amigo”, “Tá doer” and “Zig Zig”– mixed in a unique harmonious sequence that revealed in a lively and animated manner the incredible qualities of Yuri’s orchestra and his own unbelievable sensibility as singer. In contrast, the second part of the concert was dedicated to calmer and more songs. An unforgettable moment was when guitars and drums fell silent to slide gently into the theme “Viola” dedicated to the memory of the great musician Beto de Almeida (one of the Irmãos Almeida, who disappeared in October 2013), to remember to all those present the important historical and political value that music has in Angola and to commemorate Beto’s important role in the valorization and development of popular national music.

This intense moment reminded us all that music has had its martyrs in Angola, and that the cheerful character of most Angolan music can still, as always did, even in the most dynamic carnival rhythm, accompany the tragedy of history, the fight for freedom as well as the mourning of political deaths.

That wasn’t the only profound moment of the night, and as Yuri stated, the best was yet to come!!! Yuri invited on stage Don Kikas with whom sang the theme “Pura sedução”, a classic, known by almost the whole arena, and then continued alone with two romantic pieces: “Regressa” and “Sanzala”, a theme that flows from a semba structure to a mixed structure of Semba and Samba, and that prepared the public for another rhythmic journey and a new artist, when the diasporic Caboverdian artist Nelson Freitas appeared to sing “Saia Branca”. Finally, the artists sang together two more songs: “Ir mais longe” and a funana that Yuri had composed some years ago as a tribute to Caboverdian music and culture.

What a night! Different generations of star Angolan musicians– Maya Cool, Paulo Flores, C4 Pedro and Big Nelo, The Groove– all participated in this enormous event and gave their best– all of them showing highest quality of musical and stage performance.

Then Os Piluka arrived on stage for the climactic moment, showing the power that makes them the most sought-after kuduro group today.

he concert was almost at the end when Yuri da Cunha decided to pay homage Angola and asked the audience to sing with him the Angolan National Anthem. It was the most touching moment of the night, as Caboverdians, Portuguese nationals, and many foreigners sang together with the enormous Angolan community of Portugal to express their respect and love for Angola and its culture. All singing in unison in a spirit of friendship and familiarity and celebrating the continuous cultural exchange existing between Angola and Portugal.

Anselmo Ralph was the last artist to appear on the stage. He sang “Curtição” e “Única mulher” together with the public, who could accompany every word till the point of singing last song till the end leaving Anselmo listening and admiring the effect of the whole theatre interpreting his song.

The celebration of this 20 years career ended with the hits “Atchutchutcha” e “Kuma Kwa Kie” (which in kimbundo means: The Sunrise) while, appropriately, a new day was almost about to dawn. The last song lasted more then 10 minutes to give all the artists the time to re-enter the stage and to dance all together while Angolan carnival started exploding with the increase of the percussion and speed of the Semba flowing briefly into kazukuta to then go back again to the original version.

The whole Meo Arena was jumping and dancing, all people hugging each other celebrating friendship, just as Yuri had asked. This all couldn’t end, of course, without Sabonete Sabão: a popular song to cleanse energies and kill evil.

The dancers on stage began demonstrating the typical carnival movements, improvising and just following the music. Carnival really appeared in all its spirit and all became movement, and the Angolan community was united, proud, happy… and generously open to those who were there to show their love for Angolan music and dance. When Yuri da Cunha presented on the stage his MTV African music award, won for the Best Collaboration, he raised up the award, saying: “Lisboa, Portugal, Angola, this is not mine! This prize is ours Lusophone people, and it’s here for you”.

Yuri da Cunha, this great musician and amazing performer showed another side of his artistic activity: a commitment to Angola and its traditions as a central point for the development of the future of Angolan musical and cultural identity. With his words “only protecting the past we can build the future” he declared that a great part of Angolan past still needed to be analyzed and re-elaborated and in its roots there are the seeds for a much-awaited, democratic development.

His music is the narration of this journey.