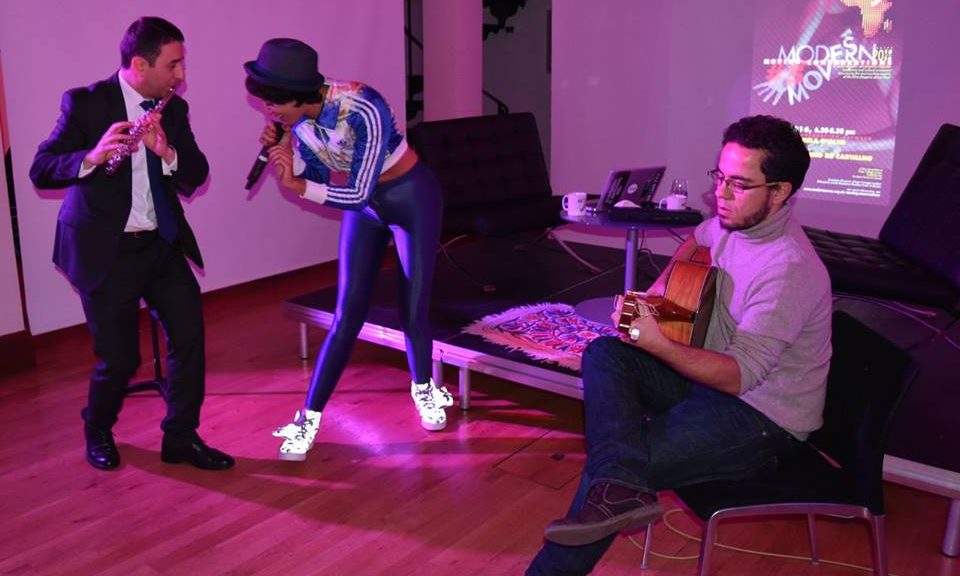 Modern Moves organised a stupendous MOVING CONVERSATION on the 8th of February. Our guests were Brazilian Slammer, hip hop artist, and all round Black Atlantic performance diva ROBERTA ESTRELA D’ALVA, in conversation with our charming, knowledgeable colleague from the Brazil Institute at King’s College London, the man whose conversation is laced with samba and bossa nova songs, DR VINICIUS MARIANO DE CARVALHO. For this Brazilian themed event there were also Caipirinha and doces and salgados from the KCL catering team, and DJ John Armstrong to make sure there is a fantastic playlist of Brazilian music in the house! Moreover, Master sambista from Rio de Janeira, Jimmy de Oliveira, creator of the samba styles ‘samba funkeado’ and ‘samba fragmentado’ graced the occasion with a special set of performances for us!
Please find the full report below!

‘If we talk about the potential for change, we are talking about the favela as the most creative place in Brazil today’—Vinicius Mariano de Carvalho

These two comments, by our guests at this, the fifth in our Moving Conversation series, sum up the trajectory of this fascinating and energetic encounter between them. Roberta of Sao Paulo, whose multi-dimensional career encompasses slam poetry, theatre, performance, singing, academic writing, all folded into the composite character of the ‘Actor-MC’ (which she both embodies and theorises), was in conversation with the equally multi-dimensional Vinicius of King’s Brazil Institute, an academic who sings, conducts, and writes with equal ease. These Brazilians meeting in London were able to spark off in the Anatomy Museum that ‘flash of spirit’ (in the words of Robert Farris Thompson) that animates the dance floor and that, in our vision, animates our Moving Conversations. Fittingly, they started the conversation not with speech but with song—and that too, a song about the god of metalwork and iron, Ogum (Ogun), the Brazilian form assumed by the Yoruba deity Ogun within the Afro-Brazilian religion Candomblè. This improvised call and response between the two conversationalists, riffing on each others’ names within their rendering of a traditional ponto do candomblè, set the tone for the rest of the evening.

Vinicius and Roberta improvise with a Ponto de Caboclo

The conversation moved seamlessly from discussions of oral performative traditions within Brazilian culture and their intersections with a global, modern form such as hiphop, to Roberta’s artistic and intellectual influences (which includes the semiotician Paul Zumthor), to the ability of Black social dance to ‘save lives’ by transforming violence into the creative impulse, be it in the streets of the Bronx or the favelas of Rio de Janeiro, and, most importantly, to the inseparable nature of the sacred and the profane as manifested in all versions of the Black social dance. While Roberta returned repeatedly to examples from the history of hiphop to illustrate these points, Vinicius took those examples back to the case of Brazil. Deeper Black Atlantic kinaesthetic connections could emerge thereby which, of course, is the overall intention of Modern Moves to press out and theorize from. Thus showing clips from the film A Batalha do Passinho, which focuses on the Brazilian dance style ‘funk carioca’, revealed the social and kinetic similarities between it and hiphop. In both forms, similar body movements and footwork translated the intricacy of energy flows into kinetic virtuosity. The transformative force of hiphop as well as Brazilian dance forms, and their formation through trauma and slavery as the foundational violence of the Americas, emerged clearly through the discussion. It was confirmed in the discussion of the pedagogic potential of these dances that continued with questions from the audience.