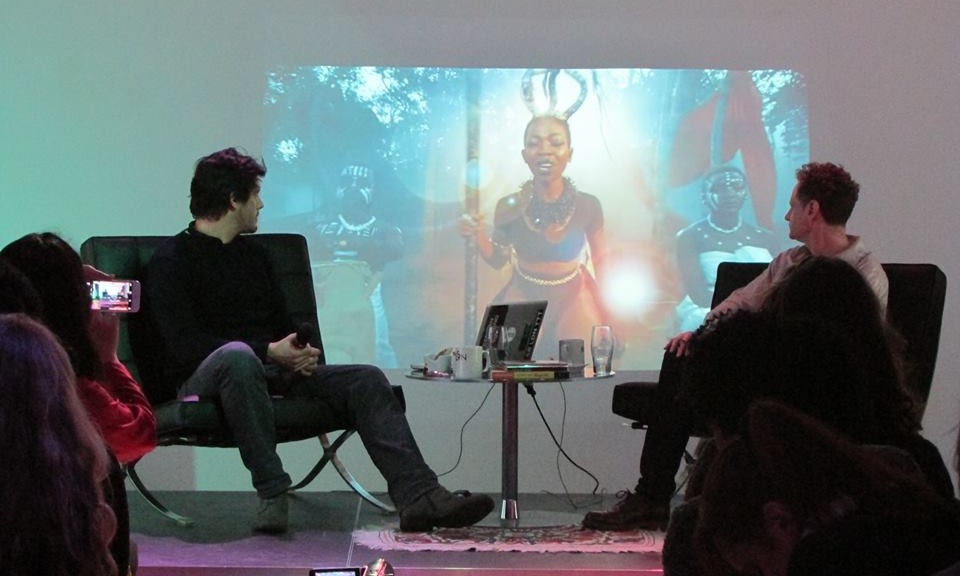 Modern Moves flagged off the second year of Moving Conversations with a West Africa feast! On Friday, 27th of November, we hosted a spectacular public talk with BENJAMIN LEBRAVE, DJ, Prolific commentator on African electronic music, music producer, talent hunter, and founder of Akwaaba Music, Accra, Ghana (http://www.akwaabamusic.com/) and JESSE SHIPLEY, Associate Professor of Anthropology at Haverford College, USA, specialist on Ghanaian popular music and dance, and the author of the highly readable and eye-opening book, ‘Living the Hiplife: Celebrity and Entrepreneurship in Ghanaian Popular Music (Duke University Press 2013). And here is the link to his new book!
http://www.amazon.com/Trickster-Theatre-Poetics-Expressive-Cultures/dp/0253016533

We were also happy to follow the conversation with a live performance by newest Afro-beat and Afro-Jazz sensation, ADEDEJI ADETAYO and his band, who were touring Europe throughout November promoting his new album, ‘A-Free-Ka-Nism’!

Our encyclopaediac DJ JOHN ARMSTRONG brought along the best of his Afrobeat and High Life collection, and we prevailed on our speaker Benjamin LeBrave to take a turn at the decks too to balance the retro with the electro in his DJ avatar of BBRAVE.

Along with music, dance, and conversation, we brought back our customised menu of West African themed canapes and Daiquiris.

Food, drink, conversation, music, dance– all for free in the heart of London. What more could you have asked for? Fabulous moves and movement can be seen in our album, click here! Our co-researcher, Alice Aterianus-Owanga wrote up some illuminating observations: do read below. In the meantime, make sure to turn up for our next Moving Conversation on the 8th of February, with a Brazil-based theme!

On 27 November 2105, a new event organised by “Modern Moves” proved that heuristic encounters between art and social sciences can take place if scholars are able to transform and open the places and forms where their knowledge is produced and shared. Continuing on a longer tradition of interactions between the fields of art and academy1 (Becker, 2007), the scholars working on this project about afro-diasporic dance cultures and kinetic transnationalism try through their “moving conversations” to employ original ways to think about social representations and cultures, focusing on the practices, the bodies and the performance, and bringing face to face in a real conversation the scholars and the artist stakeholders.

Indeed, the very form of the ‘moving conversations’ proposed by Modern Moves strongly contributes to the attempt to create new dialogues between social sciences, social actors and audiences: at the heart of one of the most famous institutions of the British and European academy – King’s College London-, these events gather each time a scholar and an art producer for a two hour long ‘conversation’, about their routes, experiences, knowledge and visions, and finally, quite often, for an informal dance performance on the dance-floor with the audience. In doing so, this public dialogue creates a groundbreaking space of confrontation, discussion and embodiment of diverse perspectives on music and dance practices.

The fourth edition of these Moving Conversations took place on 27 November 2015 at the usual venue- King’s College London’s Anatomy Museum. To open the second year of the Modern Moves project, the conversation was devoted to a tremendous musical and dancing movement that connects West African cities and African diasporas: African hip-hop and electronic pop music. Present on the dais, accordingly, were two experts of African hip-hop, and more precisely of the form of music called ‘Ghanaian hiplife’.

The first, Jesse Shipley, is an anthropologist who has been studying Ghanaian cultures for the last fifteen years. He has published a major book about hiplife music in Ghana,2 and he has followed multi-sited networks of Ghanaian artists between Accra, London and New York. Associate professor of Anthropology at Haverford College, he is also a filmmaker, author of several papers in scientific journals and critical medias, and obviously an extremely active scholar involved for the knowledge of African and black cultures.

The second guest of this conversation is also a cosmopolitan figure, travelling in Ghana and the rest of Africa in order to learn more about Black popular musical production. Benjamin Lebrave is a DJ, producer, ‘chameleon music-loving traveller’ and business developer, who graduated from ENSAE in Paris. His multiple skills, his passion for Africa and his understanding that African popular music was almost absent or not available in Europe or western markets all drove him to create the website Akwaaba, that is dedicated to offering ‘a window onto the wide diversity of music being created all over the continent’ and to distribute African tunes.3 Benjamin’s aim to promote African musical diversity goes along with the strong intention to work in a fair, transparent and ethical way with the artists.

The meeting of these two people, whose routes are connected at many levels, represented without any doubts a fantastic means to talk about the transnational identifications of Ghanaian and African diasporas through dance and music practices. The event obviously matched the expectations, both for the members of the audience who were experts on these issues, and for all the spectators who were freshly discovering the vast and exciting topic of hiplife, azonto, and the identity politics of urban music and dance developing between Accra and the Ghanaian diaspora.

The event was opened by a dance performance from a member of the National Dance Company of Ghana, Rebecca. Under Benjamin Lebrave’s musical selection of highlife and hiplife rhythms, she offered the audience an opening set of a ‘traditional’ dance that used to be very popular in Ghana in the 1960s, before performing a series of azonto dance movements, inviting even a young women of the audience to accompany her for a short duet. Azonto is a dance invented during the 2000s between Ghana and the diaspora, based on humorous movements miming ordinary actions (for example, boxing).

After this short dance presentation, Ananya Jahanara Kabir – director of the ERC project Modern Moves- proposed a quick introduction to the event, explaining that the aim of this moment was to create a conversation between the world of social dance and music, and the world of academia, before inviting the two guests on stage.

Jesse Shipley immediately took the floor and announced the plan for the conversation. He explained that the intention was clearly to address the issues of ‘political subjectivity’ and politics in music or dance practices, and to describe the manner that Ghanaians have imagined the world through music and dance since the independence. After he briefly presented his work as a scholar, Benjamin Lebrave introduced to the audience his distribution company Akwaaba and the different activities that allow him to ‘live and breathe this contemporary African music’.

Following the historical chronology, the speakers first introduced the audience to highlife rhythms that had functioned as the original soundtrack of independence and access to ‘modernity’ in decolonising Ghana. Our contributors arrived then at the emergence of hiplife, a musical genre created by the youth during the 1990s, thanks to their inspiration by both hip-hop sounds and their highlife heritage, and thanks to their circulations abroad. Jesse and Benjamin highlighted the huge importance of new digital technologies, capitalist values, and transnational mobilities for the development of new economic markets and new musical or dancing genres in Ghana and the diaspora. Indeed, hiplife has succeeded to be at the same time a national emblem and a sound for the Ghanaian diaspora abroad.

The conversation was punctuated by many video extracts, including dance videos produced by Ghanaian or African migrants in England, such as the memorable video shot in the London underground and at fast food restaurants and revealing a virtuous duo of azonto dancers.4 Thanks to unofficial videos travelling freely on youTube and social networks, these artists and dancers ‘create possibilities to move and occupy space’ in their host countries. Through the expressive and humorous power of azonto, they offer a visibility to migrant minorities in European cities and while contributing to produce a transnational definition of what being ‘African’ or ‘Ghanaian’ actually means.

Continuing the travel through Ghanaian musical history, the speakers described the emergence of a new dance form that has supplied the ephemeral movement of azonto: the akayida dance, that is still very humorous, but on a slower tempo than azonto. The conversation thus succeeded in showcasing the ceaseless process of reinvention that animates popular cultures and dances. The speakers also addressed the gender issues raised by these musical practices, that tend to focus on the figure of a male consumer, and they finally defended that these artists were never just copying the United States’ music, highlighting instead how their roots lay in many others local and global sources, outside of MTV’s standards and norms.

The conversation became even more interesting – for the people quite familiar with the topic of hiplife or hip-hop in Africa- when our contributors really tackled the backstage of their practices and their own involvement in these worlds, for example when Benjamin Lebrave shared his experience as a travelling DJ invited by many European and Afro-diasporic clubs. He proposed video extracts of what really happens when the DJ spreads his music to the audience, in terms of identification, transcultural connections and kinetic transnationalism, for example when he plays Koffi Olomide’s sounds in an Afro-diasporic party in Germany and when the audience gets hysterical on stage. For Benjamin, these Afro-pop sounds allow for going beyond frontiers of ‘diaspora’ and national boundaries, because ‘it is just excellent pop music’ that makes everyone gather around changing hybrid dance movements The few anecdotes of that kind made the audience really eager to know more about this original experience as a cosmopolitan DJ, and it partly foreshadowed what was going to happen later on in the evening.

The very heterogeneous audience asked a series of questions about the main issues underlying the conference, such as the idea of the ‘authenticity’ of these practices. The discussion focused also on the question of the part of the state in the emergence of new transnational genres and musical economies, about race and gender issues, and about the ‘complicated relationships between capital and Pan-Africanism’ in hiplife. A debate was also raised about how to deconstruct the binary between tradition/modernity, and about the importance of research to change the normative representations of what ‘culture’ should be. Finally, an important discussion arose about the importance of such research in changing common representations of Africa as land of violence and war, and in enabling polyphonic and contradictory views on cultural meaning. It reiterated why it is necessary to problematise how we create knowledge and visibility about cultural movements without reifying it through ethnocentric views.

After the conversation proper, the audience and the contributors continued the discussions informally while sharing Daiquiris and a sampling of West African-themed canapés, before joining together on the dance floor where Benjamin Lebrave and DJ John Armstrong offered frenzied rhythms until late at night. It was the time for several members of the audience to reveal their skills as dancers and we observed (and enjoyed) surprising ‘moving conversations’ between dancers and scholars, students and teachers, experts and neophytes.

In sum, even if this event was not exactly a ‘conversation’ and an interaction between two people revealing their experiences, it proved to be a very successful way to gather two different types of experts on contemporary African pop and hip-hop music, for the enjoyment and the learning of all the audience. The size of the audience, their dverse origins (students, dancers, cultural entrepreneurs, scholars) and their great interest for this conference are a proof of the efficiency of such a kind of conversation between arts and the academy for the transmission of knowledge and for the impact of social sciences and the Humanities within and beyond the academy.