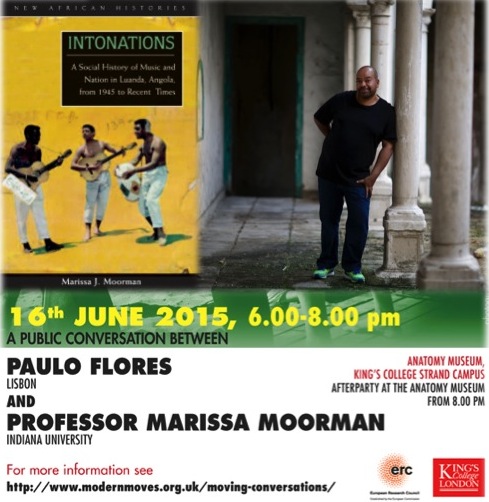 On the 16th of June, our Moving Conversation #3 brought together Paulo Flores, renowned Angolan musician and songwriter based in Lisbon, and Marissa Moorman, Professor at the University of Indiana. Flores is a leading proponent and indeed reviver of the Angolan dance music genre Semba, which played an extremely important role in Angolan nationalism. Flores’ semba compositions have the rare quality of being both good to dance with and good to think with. His music is political, dealing with the hardships of Angolan life, the war and corruption, but it is political because it needs to be danced to. Marissa Moorman‘s book Intonations: A Social History of Music and Nation in Luanda, Angola tells the story of how Angola’s urban residents in the late colonial period used music to talk back to their colonial oppressors and, more importantly, to define what it meant to be Angolan and what they hoped to gain from Independence. It is to date the only book in the Anglophone world at least that satisfies the thinking dancer’s need to understand the historical and political context for the Angolan genres kizomba and semba.

This encounter between two high profile personalities in their respective worlds enthralled the audience with a frank and fascinating conversation about dance, diaspora, transnationalism and other shared passions. Paulo Flores sang two songs unplugged and we were treated by some amazing dance performances as well as excellent selection of tunes spun by our resident DJ Willy the Viper from Paris , with able support from DJ John Armstrong, ‘the encyclopaedia’ from London. Our guests enjoyed the music as well as a great selection of Vinho Verde and Angolan-themed canapés!

See a selection of photos from the event here on the Modern Moves Facebook page!