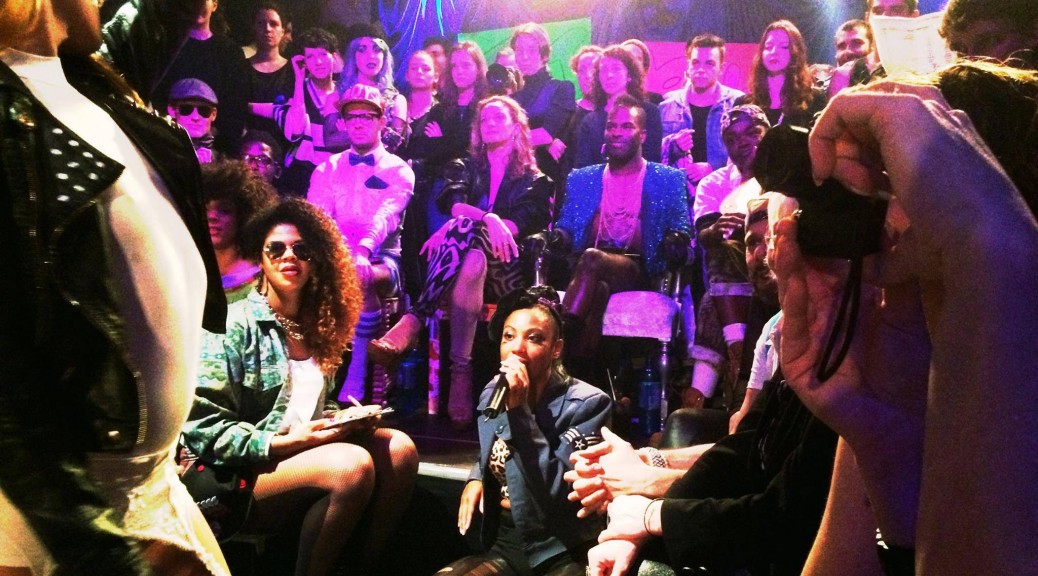 In February I was invited to be a “celebrity guest judge” at the “Tit Bit Ball” in Berlin, which you might think of as a vogue ball for everyone. The major house in Berlin is the House of Melody, founded by Georgina Leo Melody, an Afro-German girl who learned voguing in New York with the masters of the form. In general the House of Melody is responsible for most of the voguing events in Berlin, though I learned there are other houses and balls throughout Germany, from Dusseldorf to Hamburg.

Whereas the Berlin Voguing Out Festival is remarkable for its extremely high production value, the “Tit Bit Ball,” though no less spectacular, was held at Südblock, a reasonably sized gay and lesbian bar in the center of Kreuzberg. I had been to Südblock before but mostly for drinks or lunch, so the way the space transformed from a café/bar into a cabaret-style performance space was really interesting. Tables were pushed out of the way, a short runway popped up, and a black curtain slide open to reveal the main stage where the judges sat in specially designed chairs for the occasion.

The ball began with a public workshop of the elements of vogue. Anyone could participate. We did a catwalk performance where we were taught the elements of voguing, hand motions and how to position yourself on the catwalk. I was surprised by all the people who participated from the audience, some of them dressed to the nines in crazy looks but who did not necessarily want to compete in the ball itself.

Once the ball began my task as a judge was to evaluate the competitors’ runway performance and the creativity that went into their looks. Judging creativity is a hard task because you want to give everyone an “A” for effort, as the saying goes, while at the same time being discerning. In order to advance to the next round a competitor needed to score a “pass” from all the judges. One single “chop,” or “no,” from one judge meant you couldn’t advance to the next level.

The performances were beautiful. People of varying levels of expertise competed, and even folks who had not signed up to compete popped out of the audience and took over the catwalk when they felt the urge, often to much applause. There was a competition for designer shoes, for instance, where people from the audience (with no expertise or knowledge of voguing) with the right shoe size did their fiercest runway walks and won the pair of shoes based primarily on audience response.

The most interesting thing I learned about voguing in Berlin is how powerful the culture is for fostering a sense of community and belonging for queer and/or brown people. For some, voguing could be seen as an aesthetic form, a spectacular dance form, full stop. But for the brown and queer bodies who do voguing in Germany, there’s an additional layer of meaning, one centered on the message of self-love invented by ballroom. This is especially relevalatory when thinking about the origins of voguing and ballroom culture as a space created by brown gays and transgender people responding to racism, homophobia, transphobia, and other social exclusions.