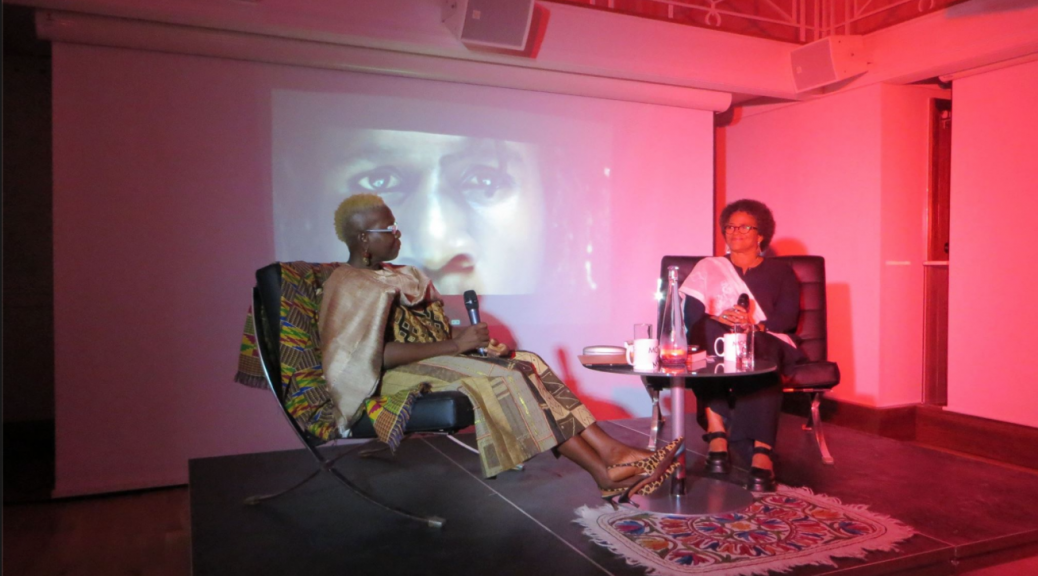 Zouk met Dancehall, Jamaica met Martinique, the Francophone and Anglophone Caribbean sang, spoke, drummed and danced together in this one of a kind encounter!!!

The second in Modern Moves’ Moving Conversations series of public events  brought together Mme Jocelyne Beroard of the world-famous music group Kassav’ and world-renowned academic and dancehall scholar Professor Carolyn Cooper of the University of the West Indies, Jamaica. Their conversation ranged from dance as/ and soul food of the diaspora (the name Kassav’), to the difficulties of intra-Caribbean air travel, to being successful women in the world… and of course, the politics and philosophy of creolite/ creolisation. Spectacular dance showcases by Cindy Claes (dancehall) and Zil’oKa (gwo ka) followed, and everyone fell under the spell of the gwo ka drums… DJ John Armstrong followed up with a playlist honouring the ‘two-step’ dances that give us so much joy- zouk, kompa, kadans, soca, merengue… while KCL catering outdid themselves with a fabulous array of bespoke Caribbean canapés and rum punch. Read the full report here!

The Anatomy Museum was already fully packed when the evening started with a couple of dancers from the London-based dance and percussion group, Ziloka, dancing zouk to the famous Kassav’ song Zouk la se sel medikamen nou ni in front of the stage. After this homage to Jocelyne Beroard, Cindy Claes paid in return a dancehall tribute from the venue balcony.

This dance appetiser opened the public encounter between Prof Carolyn Cooper from Jamaïca and singer Jocelyne Beroard from Martinique. The full range of Caribbean islands were involved as Ananya Kabir recalled in the introduction of the event that she had met Carolyn Cooper in Port-au-Prince, Haiti. And soon after that, on seeing Jocelyne perform at Kassav’s last concert of their Marronage tour in Paris, the Modern Moves project director decided to implement a moving conversation between these two powerful Caribbean ladies.

Carolyn’s first question to Jocelyne was about the choice of the name Kassav’ for the band. Jocelyne explained that the name had been carefully chosen as a way to (re)connect with some specific cultural aspects of Martinique. Coming from ‘cassava’, the name Kassav’ represents a pan-Caribbean food while avoiding the link with the slave trade conveyed immediately by that other recognisable Caribbean product, sugar cane. According to Jocelyne’s explanations, kassav is also the name of a cake made from cassava, cheap and nourishing. Besides, the evocation of the cassava also enabled a link to Africa where this root is commonly used in food. But perhaps the most interesting reason was that the way the cassava is prepared before being cooked and transformed into the kassav cake was a metaphor for the process of Kassav’s musical creation: “getting rid of what was poisoning our creativity”. Through this formula, Jocelyne described the soundscape of Martinique when she started singing with Kassav’ as surrounded by French music broadcast on air as well as Haitian music which was very popular at that time. Furthermore, Jocelyne told us how music bands from Martinique and Guadeloupe were imitating salsa and calypso music as well as playing ‘folklore’ music, e.g. biguine, mazurka, etc. Therefore, Kassav’ had a mission: “creating a new sound and a new music” that is able to retrieve the culture of the French Antilles and offer something else that did not exist yet.

Picking up on this idea of food in general and the importance of cassava in particular in the recipes of Jamaican and African meals, Carolyn Cooper noticed that in the case evoked by Jocelyne, “music itself now becomes part of the sustenance of the people”. Jocelyne explained indeed that the meaning of one of their most famous songs– which indeed opened the evening, Zouk la se sel medikamen nou ni— signified “zouk is the only medicine that we have”. “Slaves were using the music to gain strength,” said Jocelyne, “even if you’re sad you can dance and spread yourself and evacuate your pain.”

Picking up this idea of music as medicine, Carolyn recalled to the audience Bob Marley’s lyrics “One good thing about music / When it hits you feel no pain” and developed the notions of music and trauma, music as part of an healing process able to help people to overcome their sufferings: “you listen to the music and enter that space of transport and feel yourself transformed”. Following on, Carolyn made us listen to Bob Marley’s One Drop and stated that if reggae is considered a music resisting against the system, so is zouk.

Jocelyne explained how their success in the metropolis first started with the Caribbean diaspora spread over Paris suburbs as Kassav’ allowed for conveying a sense of togetherness between themselves. Signed in 1987 by Sony after successful sold out concerts in Paris and tours in Africa, Jocelyne noticed that “for the identity of French Caribbean people, Kassav’ has been something very important”.

She particularly insisted on the importance of the use of the Creole language in their music identity: “We wanted to put Creole in front, we wanted to give Creole a new breath” while getting rid at the same time of the idea of Creole as “low status”. “We would make it poetic, we would choose our words”. However, even while Creole was used as a cultural claim, the use of such a particular language did not prevent Kassav’ from meeting with great success all over the world. “It was the music talking to them first,” said Jocelyne about African aficionados of their music.

On being asked about the new generation of French Antillean female singers, Jocelyne explained their tendency towards imitating Rihanna or Beyoncé. If the sexualisation of female singers is obvious nowadays, Jocelyne Beroard acknowledged that she never played the role of the “sex object” put in front of the male band.

An important part of the conversation was dedicated to the tension between remembering and forgetting slavery as a cultural heritage which Caribbean people has to deal with. In relation to the expression of slavery through music and dance, Carolyn noted that “it’s not the pain of the remembering that matters, it’s the celebration that comes from the music itself, the rhythmic power of the music that said yes we are talking about memory and slavery but those drums, that beat came to us alive.” “About the dancing body, and music, and movement, and even the lyrics maybe asking you to remember a painful past, the embodied movement, the actual dance becomes a way to go through that memory into your present.”

Questions from the audience raised issues around pan-Caribbean circulation as linked with economical, political and ideological aspects; the potential lack of interest from Caribbean people in their own culture until value is acknowledged from outside; about the experience of Kassav’ in Angola and their impact on the development of Angolan music and especially kizomba; the importance of Kassav’ in the Congo-Kinshasa’s soundscape and their inspiring role for a generation of DJs and musicians; the tradition of resistance through art and music and Jocelyne’s commitments towards society and children and her photography skills; their potential relationship with Brazil; the consistency of Kassav’s sound over their 35 years career; and the key issues encountered by ‘global African people’.

Music in its relation to food, language, resistance, trauma, collective memory and forgetting, Caribbean identity, gender, in short– with different deep aspects of culture– here were the main ingredients of the second moving conversation.

Following immediately the 2 hours exchange punctuated by laughter and a palpable camaraderie between Carolyn Cooper and Jocelyne Beroard, rum punch and Caribbean themed canapés were offered to the audience. Soon after, Cindy Claes performed her entire dancehall piece and Ziloka took over the stage with their gwoka show, even leading the crowd in a joyful improvised drum circle. The evening ended with a luminous Caribbean set by DJ John Armstrong to which the crowd danced zouk, salsa, beguine, kompa among others. Food, music and dance were definitely the essence of our second moving conversation!