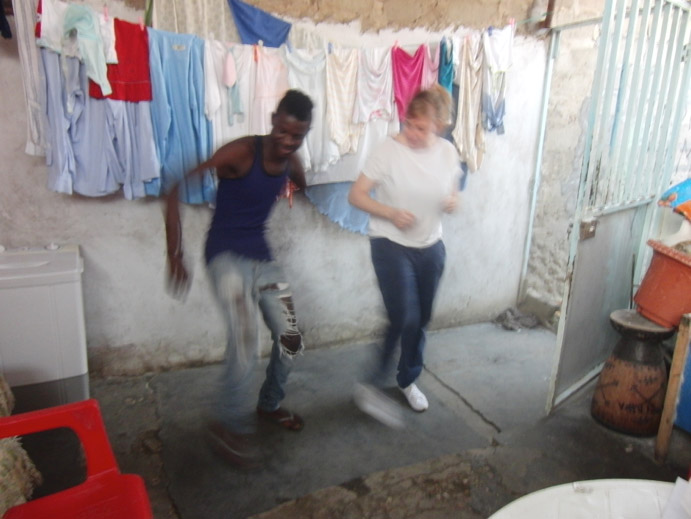 Stefanie Alisch studied musicology, Portuguese and English in Berlin and Salvador da Bahia while working as a DJ. Currently, she is finalising doctoral research into the ‘carga’ concept in Angolan kuduro music and dance at the Bayreuth International Graduate School of African Studies and the Forschungsinstitut für Musiktheater at Bayreuth University. She conducted several months of field research in Luanda (2011 and 2012), Lisbon (2012-2013), Maputo (2012), Johannesburg (2013) as well as Paris, Amsterdam and Berlin during which she actively participated in dance, music and media rehearsals and performances. Her work encompasses research, teaching, publications and creative projects on kuduro, groove, broken beat, music and bodily-performative practices in the Black Atlantic, sound system and DJ culture; in addition, she has interests in farsi pop, polysemes in popular music, cultural transfer in the Portuguese-speaking realm, and the mediality of music and dance.

Stefanie’s work on kuduro has been of great interest to Modern Moves from its earliest phases, and has been crucial for the development of the project’s Luso-African interests: in May 2010, she organized the First International Conference on Kuduro at the Associação Cultural e Recreativa Cha de Caxinde, Luanda, which was attended by Ananya and others who would become part of the Modern Moves network: Advisory Board members Marissa Moorman, Fred Moehn and Manuel Barcia, and Modern Moves Friend, Benjamin Lebrave. Stephanie feels that while musicology and popular music studies widely acknowledge the importance of elucidating the role of dance, there are few dedicated programmes or institutions actually doing so. Thus, sharing reflections, contacts, literature, manuscripts, and hours of dance in the unique network of Modern Moves, with its focus on rhythms and dance in and beyond the Black Atlantic, is vital to her research.