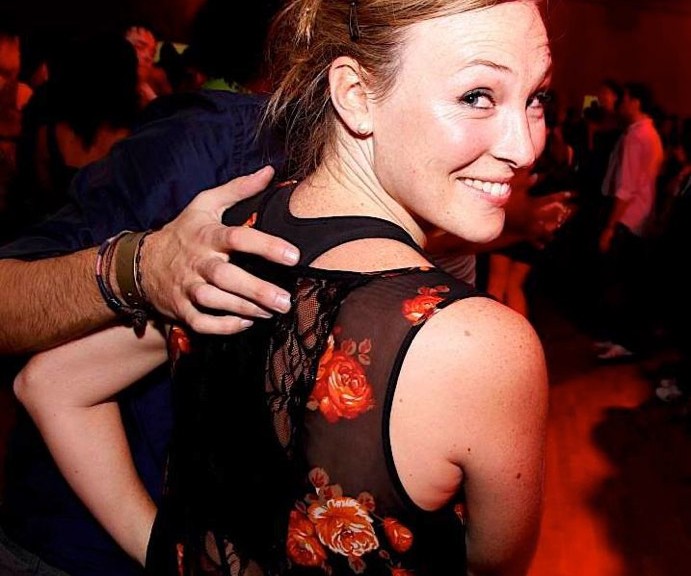 Brigid McClure, known as ‘B’ in the academic community and as ‘Chip’ in the dance community, is currently based in the Department of Culture, Media & Creative Industries at King’s College, London. Before university, B spent a year living in South Africa, teaching violin to underprivileged children in the township of Soweto and playing with the South African National Youth Orchestra. She subsequently graduated in 2004 with a first class degree in music from St John’s College, Cambridge, where her work included dissertations on rhythmic patterns in South African gumboot dancing and the globalisation of salsa dancing. At the time B also played international lacrosse and captained the Cambridge Blues and British Universities teams, and began travelling around Europe dancing at international salsa festivals. She then moved to Leeds, where she was based at Headingley Carnegie Stadium with Leeds Rhinos and Yorkshire Country Cricket, and directed the ground-breaking partnership between Leeds Metropolitan University and the Rugby Football League, including the sponsorship of rugby league’s flagship knockout competition, the Carnegie Challenge Cup.

These experiences of participating and collaborating with others in music, sport and dance stimulated B’s interest in how we make sense of ourselves and others through bodily practices, and in 2010 she returned to Cambridge to complete an MPhil in Multi-Disciplinary Gender Studies, focusing in particular on gender roles and relations in social salsa dancing. B is now in the final year of a practice-led ESRC-funded PhD focusing on questions of the self, embodiment, pleasure, gender and multi-culturalism in social salsa dancing. B’s research thus has many resonances with Modern Moves, and most appropriately, her association with the project began when she met Ananya on the dance floor at a salsa congress in Romania! Through salsa, B has travelled across Europe, as well as to New York, Cuba, Puerto Rico, and the Dominican Republic, and she has recently been invited to dance at the Third Front Reload salsa congress in Rostov-on-Don, Russia in August 2014. She also teaches weekly classes in London with world-renowned instructor ‘SuperMario’ and works independently with a small group of experienced dancers to explore in an embodied way some of the ideas emerging through her academic research.